THE DRAGON TURN by Shane Peacock 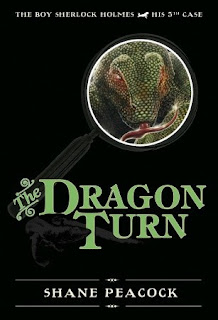 In the boy Sherlock Holmes’ 5th case, Shane Peacock takes his readers through a plethora of underground passages, secret tunnels and chambers, as well as mazes of late Victorian London streets, replete with fantastic villains, stumbling police detectives, and even a dragon. References to Charles Dickens place the setting between 1865 and 1870 (after Dickens’ last novel and before his death). Young Sherlock, who is apprenticed to the brilliant and eccentric apothecary Sigerson Bell (an allusion to Joseph Bell, one of the models for Sir Arthur Conan Doyle’s Sherlock character) unravels a conundrum of near-murder and illusion involving a love triangle of infamous magician performers. An archrival character, Malefactor--reminiscent of the caricature-type villains from Batman--makes several totally irrelevant appearances, presumably for the continuation of the series’ antagonist.

Although Peacock is meticulous in his depiction of London’s geography in the 1860s, the narrative’s language and attitude are very contemporary North America. The reader has a sense of watching a recent formula teenage movie or video game in which the characters are dressed up in period-appropriate clothes, adventuring through a period-appropriate setting. Adult readers might tire of the shallow characterization and plot manipulations that result in flashy villain-hero stand-offs in terrific situations. The story is pointedly aimed at adolescent boys: girl readers will find themselves in the familiar position of watching the boys play the game, while the girls stand by the trophies or, at best, lend a little support. Early teen boys, however, may find much to love here, taking an easy step to narrative text from video/movie entertainment. Unlike Doyle’s original Holmes, young Sherlock is frequently distracted by the sexual attractions of women, all of whom are alluring, and all of whom impact the plot only by their impact on men. Although young Sherlock doubts his ability to engage their love, the reader observes the two beautiful potential mates frequently throwing themselves in Sherlock’s vicinity: thus the adolescent male reader has an opportunity for simultaneous hero identification and wish fulfillment. The only other women in the story, who are non-potential partners for Sherlock, enter the text with questionable virtue and a tendency toward a state of undress. Young Sherlock struggles for intellectual detachment, while the narrator, perhaps empathetic with his readers, exploits the tease.

The experienced reader will enjoy allusions to Doyle’s original text (references to cocaine, the name ‘Irene Doyle’ for one of the attractive young women, etc.). Also, the story has descriptions of Sherlock’s restless mind and developing deductive genius that hearken back to Doyle’s famous protagonist. Further, Peacock has fun allusions to other Victorian writers, especially Dickens (for example, references to spontaneous combustion taken from Bleak House, or a character’s name from Our Mutual Friend). Dickens actually appears in a gratuitous scene doing a reading of Nancy’s murder from Oliver Twist.

The plot concludes with an “Aha!” surprise. Thematically, Peacock takes some pains to underscore the value of virtue over vanity and pride. The villains, who are slaves to fame, escape justice; and young Sherlock Holmes, who has saved several victims’ lives, completes the case without recognition for his brilliance or daring. Bell, an alchemist, reminds Sherlock, “You must turn yourself into gold…. Here is what is more important than anything else--you, my young knight, did what was right.”

Email ThisBlogThis!Share to TwitterShare to FacebookShare to Pinterest
Labels: 10 and up, Middle Grade, Mystery, Tundra

See our SDSU Children’s Literature website archives for a complete collection of our reviews dating back to 2003!